When taking illicit drugs, or even dealing with tobacco, students seldom know how it effects their bodies 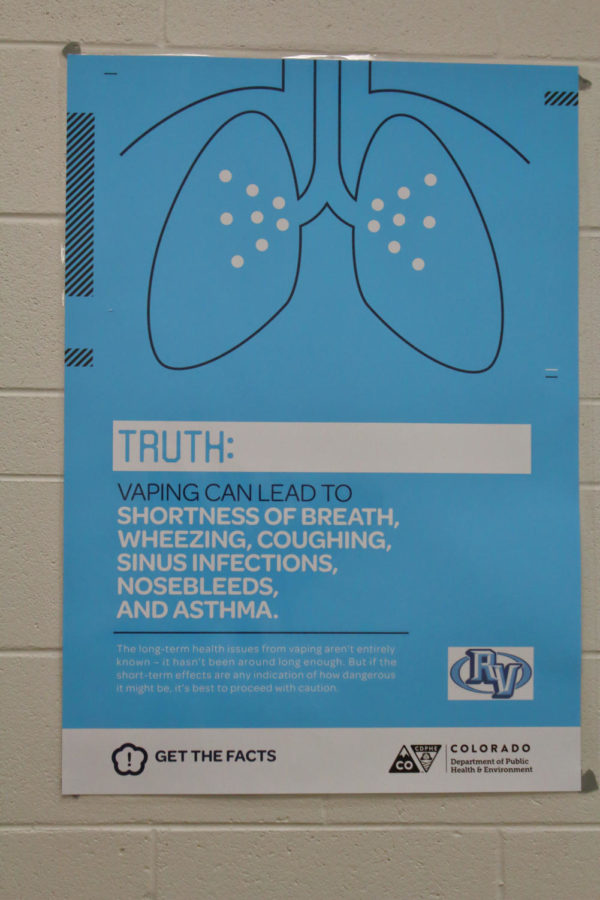 Ralston Valley has added these posters from the Colorado Department of Public Health & Environment to help deter students who may think vaping is better for the body than smoking traditional cigarettes.

Everyone has been told that drugs are bad, but has anyone really explained why?

Do you really know what are the effects of the common party drug?

Probably not, so let’s discover some of the biological effects that different drugs have on the human body.

Recently, LSD, more commonly referred to as “acid” appeared on the Ralston Valley radar as more than a dozen students were discovered to be selling and/or using the drug at school.

Not as common as marijuana use, acid is becoming a more noticeable drug used by teenagers, one that is viewed as a gateway into the world of even more hardcore drugs.

“At the start, we don’t always know if there is an addiction issue,” said Mrs. Shauna Stockmar, one of RV’s five counselors. “But we take notice if grades begin going down, of if any changes in behavior, sleeping, or friendships take place.”

According to the National Institute of Drug Abuse, “The effects of hallucinogens like LSD can be described as drug-induced psychosis—distortion or disorganization of a person’s capacity to recognize reality, think rationally, or communicate with others.”

Ingesting acid is considered “tripping”, aptly named for its hallucinogenic nature, as it often dissociates the user from reality.

While LSD can be considered euphoric, it can also lead to extreme emotional shifts that can include fear, anxiety, or paranoia.

Essentially, LSD, like many other hallucinogens, reacts with serotonin receptors in the brain. This process is believed to occur naturally in the brain in small quantities; however, the amount of the stimulation using the drug creates an experience that simulates an alternative reality.

Most of the effects of LSD are not positive, as it can cause and increase in blood pressure, heart rate and body temperature. This effect on blood pressure can be a permanent side effect after prolonged use of this narcotic.

According to TIME, “Regions of the brain involved in introspection, or thinking about oneself, and sensory areas that perceive the outside world, they found that these networks were communicating more intensely than usual.” This means that one’s idea of self changes after taking the drug, and it can become distorted, leading to the “trip”.

Marijuana, or the active ingredient THC, is another common drug used by high school students. While THC is considered to be a “safe” drug because it is not addictive, this is not necessarily true.

According to PBS, “Attention, memory and learning are impaired among heavy marijuana users, even after users discontinued its use for at least 24 hours.”

Also, while THC itself may not be addicting, the use of marijuana triggers reward centers in the brain based on the experience, which may make the user crave the high again. THC effects the same reward centers as cocaine and heroin.

THC can also cause heart rate to increase, as well as paranoia and anxiety attacks.

It can also weaken the user’s immune system as it compromises certain beneficial bacteria.

Some studies show a link before marijuana use and increased blood pressure; however, this link has not been proven definitively.

Nicotine—especially in the form of e-cigarettes or “vape”—has made a comeback on the youth scene.

This substance releases epinephrine, which is in EpiPens, and it used to constrict blood vessels and increases blood pressure. It gives a similar feeling to adrenaline, which makes the user feel powerful.

Long time use of products that contain nicotine can lead to congestive heart failure.

According to Healthline, “Smoking-related diseases are responsible for about 435,000 deaths per year in the United States.”

There are many reasons beyond the moral considerations not to do drugs; it can be detrimental to the user health, as it has biological effects on each user. It can also be damaging to a student’s academic progress or lack thereof.

“As counselors, we have different steps we can take in terms of intervention,” Stockmar said. “We have Jeffco Intervention services and drug counseling.

“When students are caught at school, we are not involved until after disciplinary action has already taken place through the school,” Stockmar added. “We have re-entry conferences and we have to put a safety plan in place.”

*The Jeffco Office of Student Engagement/Drug Intervention Services offers assistance to students who have been suspended for substance use. If interested, contact Kimberly Boisvert with the student engagement office at 303-982-3784 or via email at [email protected]*