Device Addiction at Every Age 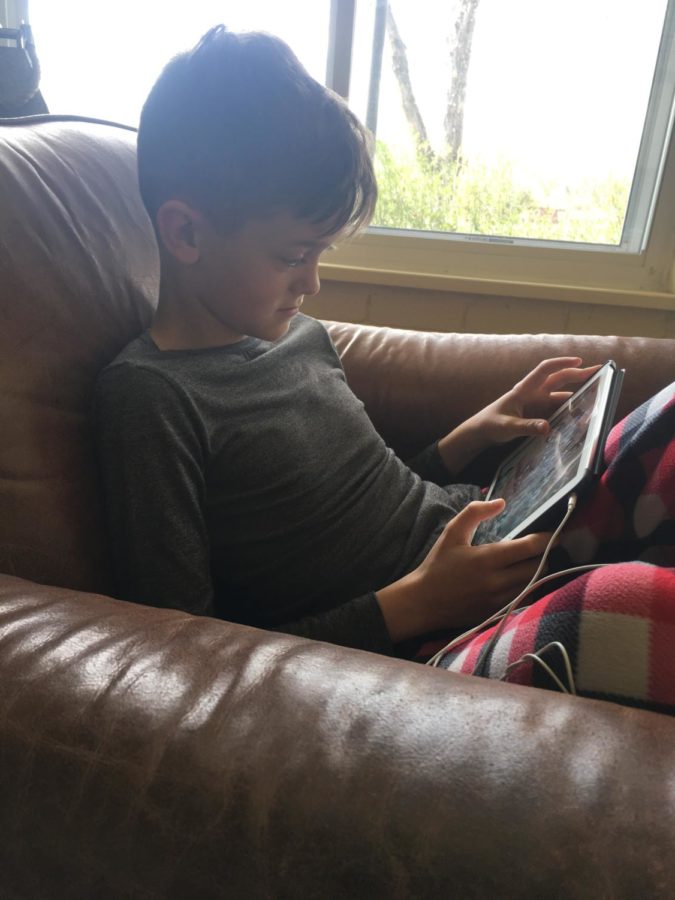 Gage Clymer playing a game on his iPad. (photo by Jody Clymer)

Children and teenagers seem to always be glued to screens, causing device and cell phone addiction to be something that young people hear a lot about. Adults preach about how young people spend copious amounts of time on devices, but what is the reason behind why are we drawn to use them so often?

Gage Clymer, a 5th grader at Sierra Elementary, admittedly spends a lot of time on his iPad, with an average of six hours and twenty-six minutes of screen time over the last seven days.

“I like to use my iPad when I’m bored because you can do so many different things on it,” said Clymer. “If I feel like drawing, I can draw. If I feel like listening to music, I can listen to music. There’s a lot of options and there’s always something to do for any mood I’m in.”

Freshman Breana Harney also admits to spending a lot of time on her phone, with an average of five hours and forty-one minutes over the last seven days.

It is commonly known that the teenagers and children of this generation have some extreme device addiction, but adults should also be held accountable. Reiley Edlund, a junior at UNC, has a screen time average of three hours and twelve minutes over the past seven days.

It’s easy to reach for your phone or any other device in a fit of boredom to entertain yourself, but it’s just as easy to get lost in apps and spend a lot longer staring at the screen than originally intended.

“After quitting almost all forms of social media, I find that I spend a lot less time on my phone,” Edlund said, “I have been trying to limit the time on my phone by spending more time with real people, not just a screen,”

Finding hobbies outside of the internet is a way to help limit device usage. When enjoying an activity that isn’t online, it is less likely for someone to have the desire to grab their cell phone or computer.

Most people struggle with device addiction in some form another. Some might be addicted to a game on their cell phone, or maybe they just can’t stop scrolling through Instagram. Because of the convenience and immediate entertainment, device addiction is a hard habit to break, but doing things like setting up the downtime option on iPhones or just being aware of time spent on the screen can also help bring the number down.

As Edlund said, “I try to make an effort to not use (my phone) when I’m around other people or when I get home and I’m with my family. I actually find that I use my phone most when I feel alone and lonely as something to replace the feeling of being with other people.”