Legacy of a Burnt Book 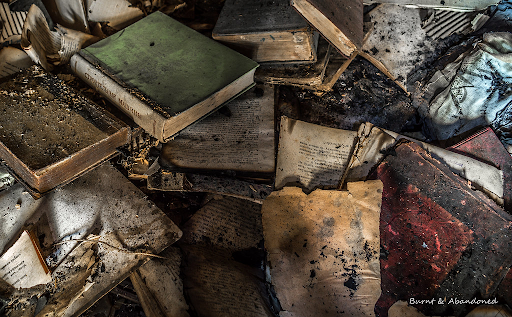 A pile of burnt books that can't teach their lesson any more.

Books were first burned during the Qin dynasty in China but the most prominent was the book-burning by the Nazi party of Germany. Today, books are sources of entertainment and knowledge. But books, just like everything else, can offend people.

This is especially true in the fiction book Fahrenheit 451 by Ray Bradbury, which tells of a dark and grim future where all books are illegal. Their government bans anything that it disagrees with.

Bradbury puts this concept in the simplest of terms in his book, Fahrenheit 451. “Colored people don’t like Little Black Sambo. Burn it. White people don’t feel good about Uncle Tom’s Cabin. Burn it. Someone’s written a book on tobacco and cancer of the lungs? The cigarette people are weeping? Burn the book.”

Freshman Xander Conner, a freshman who has never read Fahrenheit 451 or any other controversial books. “You should have your own opinion because it’s right to have one,” said Conner about the passage.

Historically, a book is banned because it contains controversial or offensive references throughout the book. A good example of this is 13 Reasons Why by Jay Asher. It touches on sensitive topics such as suicide, making it banned in Mesa county libraries and other libraries around North America.

Tim Johnson, a parent of one RV student and one RV alumni also shared his thoughts on the same passage. “To me, that is saying ‘get rid of everything you disagree with,’ said Johnson. “It’s hardline thinking, and we wouldn’t have anything to read if it offended [someone]. But we need to be guarded on what we count as proper literature.” Proper literature or good

literature can be described in a way that the reader feels different afterward and engages the reader.

Books are a major source of knowledge and entertainment, no one can deny that. The beauty behind the cover isn’t necessarily in the text, it’s how they make us think.